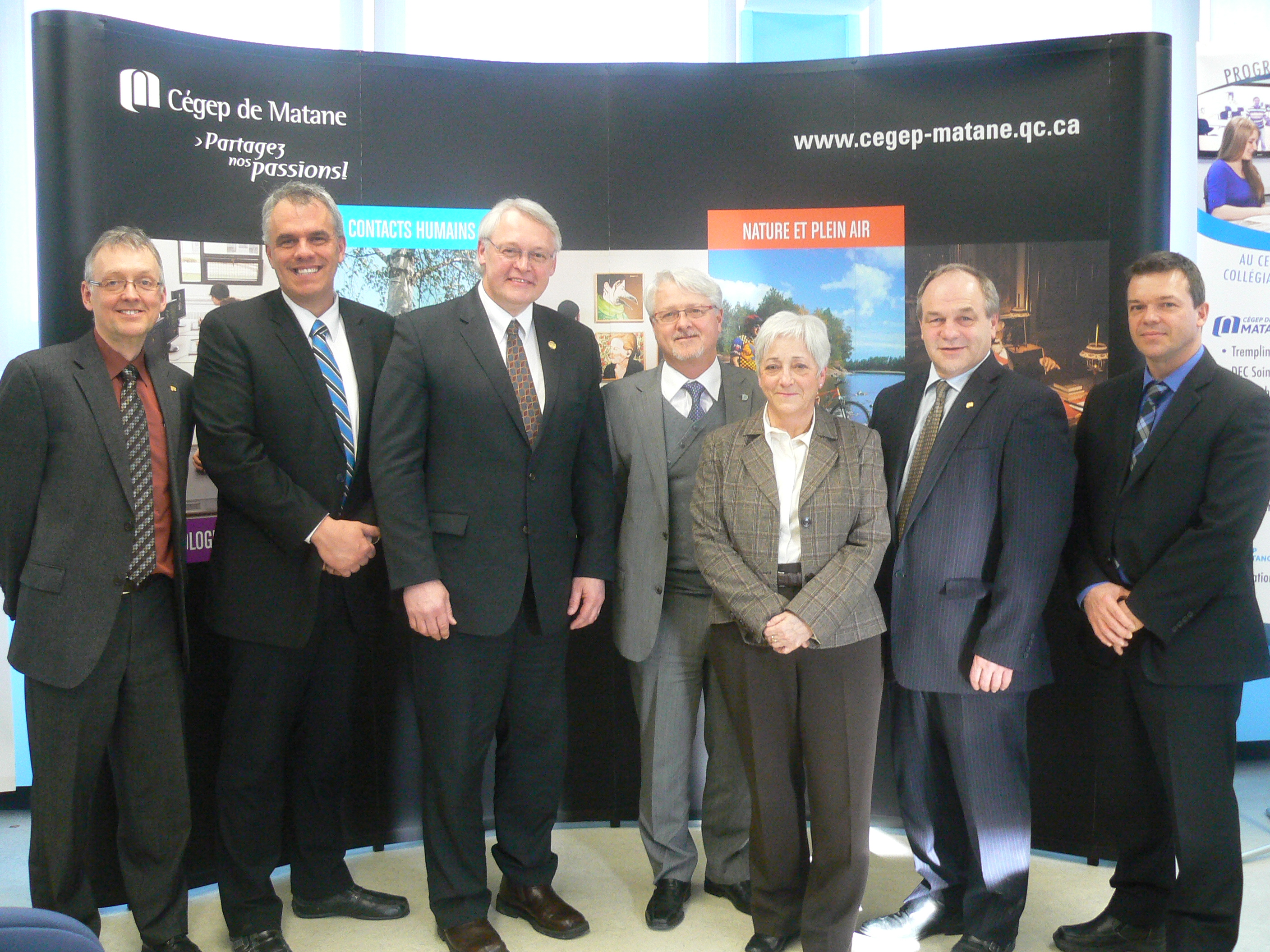 “I am very pleased to be here in Sainte-Anne-des-Monts today for the inauguration of our virtual education centre and to announce to the people in the Haute-Gaspésie that they will have access to the DCS Springboard program*, five diplomas of college studies (DEC) and seven attestations of college studies (AEC) beginning in fall 2014. Thanks to the miracle of distance education, very small groups of students from the region will be able to take CEGEP courses or, if numbers warrant, take their courses in Sainte-Anne-des-Monts. The Cégep de Matane has been here in the Haute-Gaspésie for some thirty years, offering services to businesses and continuing education services to the public. Since this past fall, we have had about 50 full-time students at the centre, and we believe this number will increase with our expanded educational offer,” explained the executive director of the Cégep de Matane.

An innovative and unifying project

Renovating the centre’s premises, installing two tele-teaching rooms and building a break room for the students will require an investment of over $200,000.

“This innovative project got off the ground thanks to the cooperation and contributions of Haute-Gaspésie stakeholders who believe in the importance of offering higher education that will keep young people in the region and train them to meet the needs of the job market. I want to thank the Gaspésie–Îles-de-la-Madeleine CRÉ, the regional county municipality of the Haute-Gaspésie, the Gaspésie–Îles-de-la-Madeleine health and social services agency, the CSSS Haute-Gaspésie health and social services centre and the Chic-Chocs school board for their support, and especially the Mayor of Sainte-Anne-des-Monts, the Deputy Minister of the Regions and the Minister in charge of the Gaspésie–Îles-de-la-Madeleine region and the Minister of Higher Education, Research, Science and Technology, who believed in our project and helped make it a reality,” added Mr. Béland.

Already recognized as the leaders of distance education, the Cégep de Matane, the Cégep de la Gaspésie et des Îles and Cégep à distance joined forces a year ago to offer an expanded selection of distance courses to Quebecers. This partnership has been leveraged to maximize the training offer available to the people in Haute-Gaspésie, starting in fall 2014, with further projects in the works for subsequent years.

– General education courses not available at the CVFC

–       Team coordination in the workplace

“The Cégep de la Gaspésie et des Îles is proud to be contributing to the increase in the educational offer in the Gaspé. The development of distance education stems from the college’s involvement but also draws on valuable contributions from professors, without whom we would never have been able to make today’s announcement,” added Cégep de la Gaspésie et des Îles Academic Dean Louis Bujold.

“The CSSS Haute-Gaspésie has a serious need for nursing staff and hopes to interest candidates in choosing this profession and studying Nursing Care at the CVFC. In addition to welcoming students for internships, we promise to hire students during and after their studies, as a personal care attendant beginning in the first year, in a clerkship after the second year and as a nursing candidate (CEPI) after three years of study. We also guarantee them a nursing position after they receive their practice licence from the Ordre des infirmières et des infirmiers du Québec (OIIQ), and we will reimburse their registration fees, books and materials when we sign their contract, up to $3,000,” announced Martin Pelletier, executive director of the CSSS Haute-Gaspésie.

Students from the RCM of the Haute-Gaspésie have had access to a daily shuttle between Sainte-Anne-des-Monts and the Cégep de Matane for several years already. This service will be maintained at a cost of $5 a day.

Cégep@distance is an integral part of the Collège de Rosemont, offering programs in French that lead to a diploma of college studies (DEC, for its French acronym) or an attestation of college studies (AEC, for its French acronym). Some courses are also offered in English. Every year, some 18,000 people register for one or more of the 200 credit courses offered in French and English, for a total of over 28,000 course registrations. All courses are offered in the continuous registration model. cegepadistance.ca

About the Cégep de Matane

The Cégep de Matane has locations in Matane, in Amqui at the Centre matapédien d’études collégiales, and in Sainte-Anne-des-Monts, with its virtual college education centre. It offers teletaught programs in Nursing Care and Tourism Techniques, and receives teletaught courses in Accounting and Management in collaboration with the Cégep de la Gaspésie et des Îles. Its continuing education service, Groupe Collegia, is a distance education pioneer in Québec. For information, please see cegep-matane.qc.ca

* All study programs mentioned in this press release are or will be only offered in French.